The University of California, Irvine, is the most recent U.S. university and the fifth campus in the university system to add a police patrol dog—a chocolate Labrador named Cliff—to its campus security program, which further puts students and dogs at risk for unforeseen harms.

This claim may seem counterintuitive, since Cliff’s role, which is funded through the UC Violent Acts and Mitigation Program, or VAMP, is to increase campus safety by detecting firearms and explosives through security sweeps of event venues. But campus and police K-9s—which typically include breeds such as German shepherds, Belgian Malinois and Labradors—have come under increased scrutiny in recent years for causing, and being subject to, numerous harms.

Several studies indicate that sniffer dogs trained to look for both drugs and explosives are prone to false alerts, which then lead to unjustified searches. Records of drug-sniffing dogs in one Washington State school district indicated that dogs were incorrect 85 percent of the time they alerted people to a substance. A 2011 study by the University of California, Davis, recorded 200 instances of mistaken K-9 alerts to various substances that were not present. An NBC News report detailed that from 2013 to 2015, sniffer dog teams funded by the Transportation Security Administration failed the TSA-administered certification 52 times at 10 large U.S. airports.

Analyses by National Public Radio and the Chicago Tribune detail several explanations for mistaken alerts. For example, the biases and subtle clues of their handlers can influence sniffer dogs, such as how the handler holds a leash or their knowledge of a substance’s presence in a training exercise. Residual odors on a person or in a space also contribute to false positives. Additionally, there are no universally recognized third-party training, testing or certification standards for police K-9s.

But false alerts are more than just mistakes. According to several legal decisions, an alert by a patrol dog in many states gives police probable cause to search a person’s car, possessions, property or body. Since dogs are sniffing all the time and over a much wider area due to their powerful olfactory abilities—10,000 to 100,000 times that of humans—sniffer dogs extend the reach of police power and increase the chance of encounters between citizens and armed officers. The American Civil Liberties Union has filed multiple lawsuits nationwide, including within school districts, challenging the use of sniffer dogs for open searches that, in effect, “make every student a suspect.”

Police K-9s also bite, landing more than 3,500 Americans in the emergency room annually, including their own handlers. Some of those bites are fatal, as in the cases of a good Samaritan, an unhoused person and an 89-year-old man sitting in his own backyard. The Marshall Project maintains an extensive database of police K-9 bites and their specific circumstances, showing that bites often start with minor incidents, such as a license plate problem, someone looking for a pet or an accusation of public urination. One Norfolk State University student was awarded $200,000 after the university’s K-9 bit her as she was leaving a party in 2015, resulting in leg wounds requiring 43 stitches. Police dogs are trained to bite as a reward, and K-9 bites are shown to be more severe than household dog bites. To compound matters, handlers often cannot immediately stop their dogs from biting (to the point a pry bar may be needed), and victims often have little recourse to police accountability or compensation.

Moreover, studies suggest that in some parts of the country, police dogs disproportionately bite men and minorities. Beyond our country’s already dismal history of using police K-9s during slavery and civil rights–era protests, recent investigations of the Los Angeles County Sheriff’s Department and the police department in Ferguson, Mo., show extended periods in which their police dogs have only bitten nonwhite people. A South Pasadena high school student wrote a 2020 op-ed calling for an end to sniffer dogs on his campus, stating, “By repeatedly targeting Black and Brown students on the false pretense that they may carry drugs, it effectively enables the idea that those students are meant to be kept under a close watch.”

Indeed, patrol dogs are regularly deployed specifically to subdue populations through fear of being sniffed or bitten. Lieutenant Darrin Devereux of the Brea, Calif., police department described the efficacy of a dog’s intimidation in a report by the Orange County Register, saying, “Often times, the mere presence of the police dog is enough for suspects to willingly give themselves up.” An Illinois school district superintendent asserted that, “The fact that students know that we’re doing these random [K-9] searches is a bigger deterrent than anything we’ve been able to put in place.” Temple University police officer Doug Hotchkiss observed, “No one wants to get bitten … You could have a dozen officers try to get a crowd under control. I bring out the dog, and they calm right down.”

Ultimately, K-9s are police technologies, or, as one Baltimore officer stated, “The dog is the most potent, versatile weapon ever invented.” Since Sept. 11, grants from the U.S. Departments of Justice and Homeland Security and the Defense Advanced Research Projects Agency have funded K-9 programs to be, as one reporter for The Guardian called them, “the public face of the war on terror.”

Finally, police K-9s are also subject to violence. Breeding police dogs is a for-profit business, and most police dogs are purchased by training facilities from breeders in Europe and the United States. The unquantifiable bodily costs to dogs used as breeding mothers and fathers notwithstanding, a fully trained patrol dog comes at a price tag of between $12,000­ and $40,000, depending on skill set training—which can happen in breeding facilities, in police training classes or even prisons. Although positive reinforcement methods are integrated into some K-9 training, harsh practices are still a routine part of police dog education, such as prong, choke or shock collars, as well as forced submission techniques. Dogs who don’t make the cut are adopted by private families or sent to shelters.

And being a police dog is certainly dangerous work. The Officers Down Memorial Page honors fallen K-9s, listing causes of death as gunfire, vehicular assault and, increasingly, heatstroke. In 2015, the Green Bay Press Gazette found that at least 46 K-9s died throughout the U.S. in a single year due to heat-related illness, particularly due to being left in a hot police vehicle. More troubling are the numerous incidents of handler violence toward their dogs. Although it is a felony to assault or kill a police K-9, recent U.S. examples reveal handlers abusing their dogs by leaving them caged for days or committing outright assaults—punching, throwing, hanging or shooting their dogs to death.

So where does that bring us with UCI’s new patrol dog, Cliff? His friendly Labrador face, his name-embroidered collar and his police handler—a former UCI baseball player—are all likely to encourage greater social acceptance of campus K-9s as a positive exercise in community policing. But Cliff is a living, breathing and ostensibly autonomous police tool whose deployment for the ideal of public safety can mask well-documented harms to both citizens and dogs.

The police and administration at the university and any other campus considering a K-9 program should meet these harms head-on. K-9 websites needs much more information than the “fun facts” UCI provides about Cliff, or colorful Zoom backgrounds featuring the dogs. The frequently asked questions section, for instance, should be immediately expanded to demonstrate awareness of common dangers associated with police dogs. Additional questions campuses should be asking themselves include:

Colleges and universities need to ask and answer these questions and think carefully before employing sniffer dogs—if they decide to employ them at all. A few weeks before UC Irvine’s August 2021 announcement of its new K-9 program, a South Pasadena police K-9 named Barry bit a 5-year-old boy in the head during a National Night Out in nearby Orange Grove, Calif. The event, intended to build trust between community and police, illuminates problematic patterns among patrol K-9s. As institutions increasingly use dogs for ever-evolving detection purposes on their campuses—including vaping, tracking “invasive” plant and animal species, and even sniffing out COVID-19—the possible harms to citizens and dogs are sure to also increase. 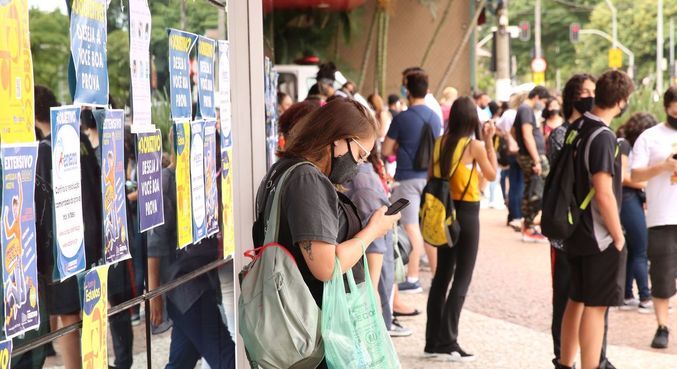 A Hybrid-Work Semester Is Wrapping Up. Here Are Some Emerging Best Practices.

Trauma Is Everywhere. My Experience With It Made Me a Better Teacher.

One of the World’s Best-Funded Edtech Companies Is Investing In AI Moonshots. Can It Work?