Ruth Hamilton was sleeping soundly in her home in British Columbia when she woke up to the sound of her dog barking, followed by an “explosion”. She jumped up and turned on the light, only to see a hole in the ceiling.

At first, Mrs. Hamilton thought that a tree had fallen on her house. But no, all the trees were there. She called 911 and, while on the phone with an operator, noticed a large charcoal gray object between her two floral pillows.

A meteorite, she later learned.

The 2.8-pound boulder the size of a large man’s fist had barely missed Ms Hamilton’s head, leaving “drywall debris on my face,” she said. Her close encounter on the night of October 3 left her shaken, but he captivated the internet and gave scientists an unusual chance to study a space rock that crashed into Earth.

“It just seems surreal,” Ms. Hamilton said in an interview on Wednesday. “Then I’m going to come in and look around the room and, yes, there’s still a hole in my ceiling.” Yes, it has happened.

Meteorites rush towards Earth every hour of every day. When they are big enough, survive the journey through Earth’s atmosphere and make a landing, they become meteorites. People collect them. Others end up in museums. Some are sold on eBay. In February, Christie’s held a record-breaking rare meteorite auction, grossing over $ 4 million.

The night the meteorite crashed into Ms. Hamilton’s sleep in Golden, a town of 3,700 people about 440 miles east of Vancouver, other Canadians heard two big booms and saw a fireball cross the sky. Some have filmed the phenomenon, according to researchers at the University of Calgary.

After Ms Hamilton called 911, an officer who entered her house first suggested that the lost rock may have come from an explosion caused by roadworks on a nearby freeway, she said. But the workers hadn’t blasted that night.

Then the officer made another guess: “I think you have a meteorite in your bed.”

Ms Hamilton didn’t sleep the rest of the night, she said, and sat in a chair, sipping tea as the meteorite sat on her bed. Ms Hamilton told local media that she initially kept the news to herself, but then reported the episode to researchers at the University of Western Ontario, where Peter Brown, a professor there, confirmed that the rock was an “asteroid” meteorite.

Ms. Hamilton also told her family and friends about it. “My granddaughters can tell that their grandmother was almost killed in her bed by a meteorite,” she said.

Meteorites have already landed in people’s homes and yards. In 1982 a six pound crashed into a house in Wethersfield, Connecticut., tore the ceilings of the second and first floors, burst into the living room and ricocheted through a door and into the dining room, where it came to rest. In 2020, an Indonesian casket maker was surprised by a 4.4 pound meteorite that went through its roof.

The chances of a meteorite entering someone’s house and hitting a bed in any given year are approximately one in 100 billion, said Professor Brown.

Ms Hamilton’s rock was one of two meteorites that hit Golden that night. Researchers about 160 miles east in Calgary said they traveled to the city to find the second in a field less than a mile from Ms Hamilton’s house, after triangulating her location based on photographs and videos that several people around the area had sent.

Alan Hildebrand, an associate professor at the University of Calgary who studies meteorites, said he and his fellow researchers were so happy to get their hands on the rock that “I think we kissed.”

Meteorites offer scientists a rare opportunity to learn more about the solar system and the asteroid belt. Researchers can sample their materials instead of looking at them from afar.

Scientists said they could also use meteorites to reconstruct their trajectories from outer space through the atmosphere to the ground, in which case the rocks may have lost about 90 percent of their mass. During air travel, meteorites can heat up to about 2,000 degrees Celsius, or more than 3,600 degrees Fahrenheit, while traveling at 50 times the speed of sound, although they can be cold to the touch at the time. where they reach the ground.

Once researchers are done studying the meteorite, Ms Hamilton said, she planned to keep it since it landed on her property. She suggested she was lucky. When asked if she bought a lottery ticket the next day, she said no; she had already won it: “I was the winner.

“I have never been injured,” she added. “I had this experience and I never even had a scratch. So all I had to do was take a shower and wash the dust off the drywall. 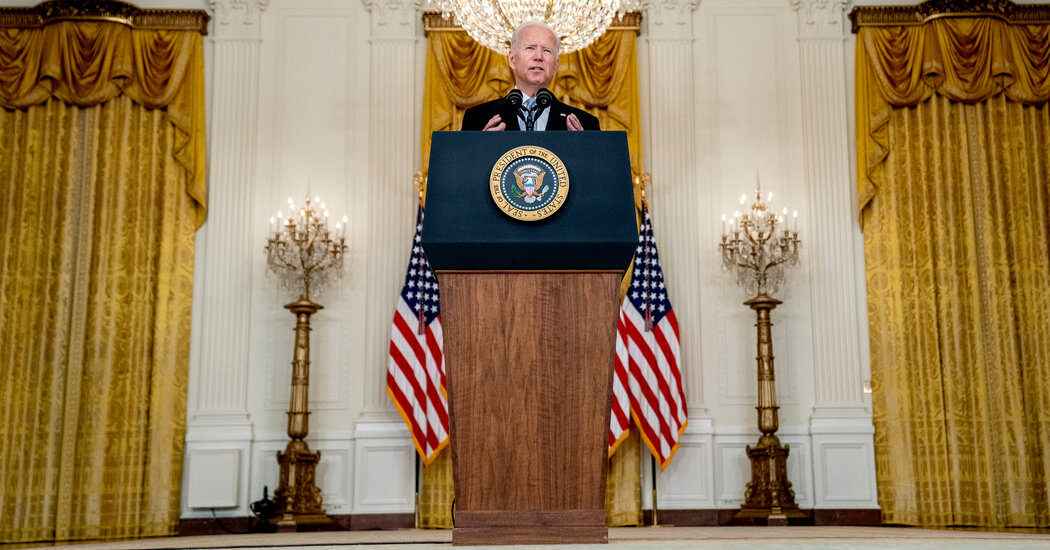 Biden supports the Afghan withdrawal, despite the last “difficult and disorderly” days.